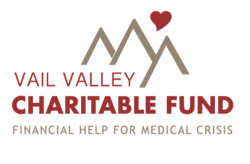 Rohn Robbins is an attorney licensed to practice before the Bars of Colorado and California. He has lived and practiced law in Eagle County since 1993, with a practice emphasizing civil litigation, family and domestic law, real estate and development, and business transactions. He is Peer Rated and has been recognized as a Fellow of the Colorado Bar Foundation. Rohn ‘s leadership of the organization has seen it through 24 exciting years of growth and provided more than 1,700 local individuals and families with critical assistance during a period of medical and financial hardship. Rohn lives in Edwards with his wife Deb. They have two young adult sons. His recreational passions include skiing, biking, weight training, travel, and reading.

Kyle Diebel was born and raised in Denver, CO and attended Colorado State University where he graduated with a degree in finance in 2004. He made the move to Eagle County in 2011.  Kyle lives in Edwards and spends his time enjoying all the outdoors Eagle County has to offer with his black lab, Trouble.

Jeremy moved to the Vail Valley in 2005 to finish his Degree from the University of Northern Colorado with an internship at the Beaver Creek Ski School.  Through the years, he has worked with different departments at both Vail and Beaver Creek before finding his way to the Town of Vail.  When not working, he enjoys biking, fishing, skiing and camping.  Originally from Maryland, he has fallen in love with the community in Eagle County and is excited to raise two daughters here with his wife Valerie.

Diane Voytko, a native of Pennsylvania, moved to Edwards and joined Colorado Mountain Medical in 2001 after completing her residency training at St. Anthony Hospital’s Family Medicine Residency Program in Denver. She maintains a large women’s health practice and enjoys pediatrics as well as taking care of entire families from infants to grandparents. Outside work, Dr. Voytko enjoys telemark skiing, mountain biking, yoga, and reading. Diane lives in Edwards with her husband Jarrett and their sons, Conrad and Malcolm.

Kara Heide moved to the Vail Valley in 1976. She founded the Vail Handicapped Ski School in the 1980’s and has retired as the Executive Director of the Eagle Valley Land Trust. Kara won the “Citizen of the Year” award by the Vail Valley Foundation in 1994 and now serves on the boards of several nonprofit organizations in both Eagle and Summit counties.

Dagmar Huber was raised in Aurora, CO and moved to Vail in 1983. Although the skiing and rafting brought Dagmar to the Valley, the remarkable community has held her here all these years. After attending several fundraisers and being involved in the VVCF’s UnDressed Calendar, she was excited to become a board member in 2004 to further serve the community. Dagmar currently works in the complimentary health services field, elder care, and as a property manager. She lives in Edwards with her husband Ken, two dogs, three horses, and two cats.

Originally from upstate New York, Martha originally moved to Colorado to attend CU in Boulder. Her roommate was from Eagle County, so weekend trips to the mountains were fairly regular. Martha defied her parents’ wishes to return to New York after school and moved to the mountains instead! After one year in the Vail Valley, the Vilar Performing Arts Center opened its door and a “real” job made it possible for her to stay. She now works for the Vail International Dance Festival and makes a regular Sunday appearance on TV8 as the host of Good Morning Vail. When she isn’t working or walking her dogs, Martha spends her time hiking, biking, skiing and snowshoeing. Martha joined the VVCF Board of Directors in 2009.

Originally from Zacatecas, Mexico, Gerry came to the United States at the age of six. He has lived in the valley ever since. Gerry graduated from Eagle Valley High School in 2017 and is currently attending Colorado Mountain College. Gerry works with My Future Pathways, to better the local behavioral health system for all. During his free time Gerry likes to run and spend time with his loved ones.

Karen is a highly accomplished Fortune 100 global marketing professional. She has been a Vice President of Marketing, Director of Marketing and Public Relations, Marketing Director, and as a Marketing Business Transformation Advocate. Karen earned her Bachelor of Arts Degree from the University of Southern California and she has been a strong advocate of community involvement working with Make-a-Wish Foundation, the United Way and other local and national charities. Most recently, the Vail Centre granted Karen a scholarship to receive a Nonprofit Management Certificate hosted by Duke University.

Lee Froman moved to the Vail Valley in the summer of 2000 to complete an internship with the Vail Daily. Upon graduating from Longwood University in 2001, he permanently relocated to the Vail Valley in Spring of 2001. In 2006 he began his career in the insurance industry and is now a Farmers Insurance Agent and owner/operator of the Froman Insurance Agency in Avon. Lee lives in Eagle Ranch with his wife and two kids and if he’s not camping you will find him mountain biking in the summer and skiing or snowboarding in the winter.

Originally from the land of Dorothy and Toto, Brooke knew all too well that her heart was in the mountains and moved to Colorado after she graduated from high school. Brooke attended the University of Colorado at Boulder and graduated with a Bachelor’s Degree in Marketing, after which it was time to migrate further west. She moved to the valley in 2006, and over the course of 13 years has worn the hats of Eagle County Schools Director of Communications, Vail Mountain Marketing Manager and now the Vail Valley Charitable Fund Executive Director. Aside from the traditional professional realm, Brooke has a true passion for yoga and teaches at Revolution Power Yoga in both Avon and Glenwood Springs. In her free time, she thoroughly enjoys hiking, trail running, snowboarding, cooking, and spending quality time with friends and family.

Terri fell in love with skiing in her home state of Michigan. She began a long career in Hospitality in the great city of Chicago.  In search of an active mountain lifestyle, Terri transitioned that career to the Vail Valley in 2006 by taking a job with Vail Resorts with various roles in Event Planning. She was an opening team member at the Arrabelle at Vail Square and enjoyed her interface with this great community during those years. In 2017, Terri decided to be more involved in the community by serving organizations such as the Vail Valley Charitable Fund. Terri is married to John, and together they are raising 3 children. When they are together, they are likely cheering for their Chicago sports teams. Terri is an avid cook and baker. She also enjoys yoga, hiking, and all that Eagle County has to offer.

Fatima Becerra was born and raised in the Vail, Colorado. She graduated from Battle Mountain High School in 2019 and is currently attending college, to obtain her bachelors degree on Social Work. Fatima started being involved in the community by starting an Internship with the MIRA Bus as an Outreach Specialist in the year of 2019, then later began working there and now started working for the Vail Valley Charitable Fund. During her free time Fatima enjoys spending time with loved ones, cooking, reading/watching movies and just being active.